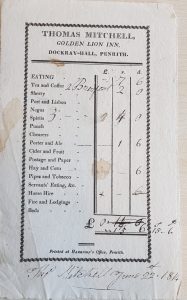 Overseers’ vouchers sometimes contain bills sent by landlords of public houses and coaching inns. Inns were often the locations of parish business, or places where those on parish business took refreshments.

In 1814, the overseers were billed by the parish representative for the following expenses at the Golden Lion:

Negus is made from wine, often a fortified one such as port, to which is added hot water, citrus fruits like oranges or lemons, spices like nutmeg, and sugar. 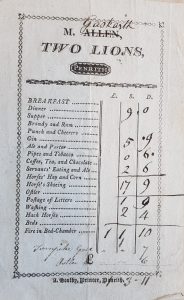 The bill was printed by A. Soulby

A bill was also submitted by a parish official to the overseers of Threlkeld who had been to the Wilkinsons’ Griffin Inn (see M. Dean, ‘Wilkinson’s Griffin Inn, Penrith’, https://thepoorlaw.org/wilkinsons-griffin-inn-penrith/).

Parson and White, Directory of Cumberland and Westmorland, Furness and Cartmel (1829)