Although most of the documents within the bundles from East Hoathly are small bills and vouchers, occasionally an item comes to light which is a bit different. One such item was a recipe for ‘Millett’ pudding’. It appears to have been written rather hurriedly on the back of a small bill and is probably in Thomas Turner’s handwriting. Just as we might do today, it was jotted down on the nearest piece of paper that came to hand. Maybe it was recommended to Turner by a customer in his shop. It is easy to imagine that moment, a snapshot of everyday life in the Sussex village.

The recipe or ‘receipt’ as it would have been called reads:

Boil the Milk & Millett till it Comes to a proper thickness

Equal in the Same as Rice Pudding – but always Backed

The document is rather stained and unrelated notes are written on this scrap of paper. The more official looking list of items on the reverse of the recipe relates to the schoolroom. Sums of money are included and if this had not been a bill for spelling books and testaments, the recipe would probably have been discarded. The list is not headed with a name or signed but a date is written 1782. Other documents in the bundle were from the 1780s.

Why millet? It appears to be offered as an alternative ingredient to rice which was very likely the preferred choice. Both were imported and maybe rice was more expensive.

Thomas Turner refers to food and his own diet frequently within his diary. [1] Often this is an account of his dinners. Typically he writes: ‘We dined on the remains of yesterday’s dinner……’

Turner appears to be very interested in new ideas for recipes, particularly those including cheaper ingredients, so relevant at a time when staple foods were scarce or expensive, especially to the poor of villages such as East Hoathly.

On Fri 27 Jan 1758, he quotes in his diary from The Universal Magazine of Knowledge and Pleasure, [2] to which Turner probably subscribed.

At home all day. We dined on the remains of Wednesday and yesterday’s dinners with the addition of a cheap kind of soup, the receipt for making of which I took out of The Universal Magazine for December as recommended (by James Stonhouse MD at Northampton) to all poor families as a very cheap and nourishing food. The following is the receipt, viz.,

This in my opinion is a very good, palatable, cheap, nourishing diet…

The introduction to this article noted the local ‘distress’ : 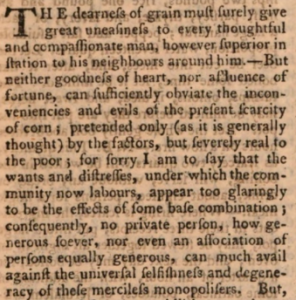 Six ‘receipts’ follow including some without meat: a ‘Burgout much used by the Scotch’ (porridge); ‘Leek-pottage’; ‘Potato-bread’, which is recommended as an alternative to corn; and beer made with treacle.

On Thurs. 23 March 1758, Turner describes this ‘melancholy time occasioned by the dearness of corn, though not proceeding from a real scarcity, but from the iniquitous practice of engrossers, forestalling etc.’ In other words, those who buy commodities cheaply but do not release them on to the market until the price has risen to a high level.

Turner follows this by claiming in a somewhat remorseful way, remembering his over indulgences and ‘revelling … being discomposed with too much drink’, that he will ‘be content to put up with two meals a day, and both of them I am also willing should be of pudding; that is, I am not desirous of eating meat above once or at the most twice a week. My common drink is only water …’

East Hoathly is a small village located in central East Sussex. It lies just over four miles south east of Uckfield, off what is now the major route running south eastwards towards Eastbourne. To the north and east the landscape is dominated by the rolling hills of the High Weald and to the south the South Downs. In the eighteenth and nineteenth centuries the parish encompassed some 2,000 acres of woodland and mixed agricultural land together with numerous ponds. Most of the parish was divided into small farms occupied by tenants renting from local landowners including the wealthy and politically influential Pelham-Holles family.

During the eighteenth century the larger part of East Hoathly was clustered around the conjunction of roads in the centre of the parish, small groups of houses together with the church and several businesses formed the heart of this small village. The parish, however, also incorporated a scattering of hamlets, including Grays, Whitesmiths, the Nursery, and part of the Halland estate. By 1801 the whole of the parish contained only 56 domestic houses, occupied by 76 families. Over the next forty years the number of houses doubled, so by 1841, 119 houses were recorded in the parish. During the same period, 1801-1841, the population of the parish rose from 395 to 607. In 1841 only 31 out of the 607 inhabitants were recorded as having been born outside of the county, suggesting a reasonably stable population with relatively few in-comers.

The church and the rector were central to village life, but the clerical living was not particularly generous. By 1872 it was worth only £261 per annum. In addition, the church was in increasingly poor repair and in 1856 it was demolished in favour of a new building. From 1752 to 1794 the rector was Thomas Porter. Porter had followed his brother, Richard, into the living and remained there until his death at the age of 74. He also held the nearby living of Ripe. According to the diarist Thomas Turner, Porter was an outgoing-man fond of entertaining his neighbours, and was often the centre drinking parties that went on into the small hours of the night. At the same time, Porter was apparently assiduous in performing his clerical duties, although these were admittedly light. There were no more than a dozen baptisms a year during the eighteenth century and sometimes as few as four. Marriages remained fairly constant at two to four a year, while burials amounted to less than a dozen per year. Porter was also diligent in pursuing his extra-clerical business, acquiring significant parcels of land and property in the area.

While in many ways East Hoathly was an unremarkable rural parish in southern England, it is notable as the home of Thomas Turner, shopkeeper and prolific diarist of the mid-eighteenth century. Turner was twenty-one when he first came to the parish in 1750. He married Peggy Slater in 1753 and the first of his surviving diaries date from 1754. Turner initially came to the parish in order to run a small general shop. At first he rented premises in the centre of the village, purchasing the property shortly after 1765. But Turner was much more than just a shopkeeper. He threw himself into parish life and administration. His meticulous accounting was put to good use in service of the village. He briefly kept the local school and later became both a churchwarden and overseer of the poor. He also acted as occasional surveyor, assisted the local tax collector, wrote wills, gave advice and acted in law on behalf of many of his neighbours. All of this was carefully noted in his diaries, together with vivid accounts of the everyday life of the parish. The last surviving volume ends in July 1765.

Other than the church, the parish supported the general shop run by the Turner, a small private school and at least two public houses, one of which was the King’s Head. The overseers’ vouchers, however, make it clear that several businesses and craftspeople were operating in the parish, including shoemakers and cobblers, a butcher, a miller, carpenters, builders and blacksmiths, together with tailors and seamstresses. These were augmented by local petty officials: for instance the excise officer, postmaster and schoolmaster, most of whom had dealings with Thomas Turner in his capacity as churchwarden or overseer of the poor. In the early nineteenth century there was a slight drift away from the agricultural occupations that dominated the parish workforce, with a growing number concerned with ‘trade, manufacture or handicrafts’. The numbers recorded in this census category grew from 15 families in 1801, to 35 families out of 97 in 1831.

Halland House and the Duke of Newcastle

The largest house in the parish belonged to Thomas Pelham-Holles, the 1st Duke of Newcastle. Halland House and its estates, straddled the parish boundary with Laughton and acted as the Duke’s family seat in Sussex. By the later 1760s, however, the Elizabethan house was very dilapidated and was partly demolished. What remained, continued to be used as a generously sized farm house.

Through most of the eighteenth century there were regular public open days or celebrations at the house, where both the local gentry and parishioners of all classes enjoyed the hospitality of the Duke of Newcastle and other members of the Pelham-Holles family. Thomas Turner recounted in his diary,

About four p.m., I walked down to Halland with several more of my neighbours, in order for a rejoicing for the taking of Cape Breton, etc., where there was a bonfire of six hundred of faggots, the cannon fired, and two barrels of beer given to the populace, and a very good supper provided for the principal tradesmen of this and the neighbouring parishes,[2]

Despite the attendance of notable members of the aristocracy, judiciary and political allies of the Duke at such events, Turner commented in his diary that the celebrations ‘might be more properly done by distributing something to the poor.’[3] Charitable donations by the aristocracy were commonplace in the eighteenth century and often distributed through the local overseers of the poor including gifts of food and fuel.[4] Thomas Turner was assiduous in noting their distribution in East Hoathly.

In common with many small rural parishes East Hoathly did not maintain a workhouse and cared for its poor in the community. Pensions were paid to a small group of regular, often elderly or otherwise infirm paupers. Food stuffs, clothing, footwear and fuel formed regular components of parochial support.

The parish also provided medical care and medicines for the needy poor. A local apothecary or surgeon provided treatment and dispensed medicines when called on to do so by the overseer of the poor.  Occasional ad hoc payments were made for specific items and small sums given to the itinerant poor. At least one parishioner was supported in Bethlem Hospital, an institution for the ‘insane’ poor in the City of London. A number of illegitimate children and babies were maintained by East Hoathly parish. These infants were boarded out locally (often with members of the child’s extended family) and subsequently placed in some form of apprenticeship. In addition, the parish ensured that repairs were made to cottages and other dwellings that housed their impoverished men and women. At least one cottage, at Scallow Bridge on the outskirts of the village, was used to house the poor. This ‘poorhouse’ was owned by the parish and accommodated two families, in 1834 William Hutson occupied the lower dwelling and William West the upper. Both paid an annual rent of one shilling.[6] Labouring work was given to the able poor particularly when these cottages or the church required maintenance.

In the year ending Easter 1776 East Hoathly raised £199 through the Poor rate.[5] By Easter 1803 this had more than doubled to just over £418. Of this, £358 was spent on relieving the poor and a further £13 on the removal of paupers, overseers’ expenses and legal costs. In 1803 the parish was permanently caring for 22 adults, 3 children under 5 and a further 13 children between the ages of 5 and 14. In years of extreme stress, particularly when the harvests failed, many more agricultural workers were thrown ‘on the parish’. In 1801, after two consecutive years of crop failure, men from East Hoathly joined those from the neighbouring parishes of Chiddingly, Framfield and Buxted in order to march to Lewes. This hungry crowd of nearly 300 demanded that the Sussex Bench order some form of poor relief for themselves and families.[7] It is difficult to say if a parochial ‘wage subsidy’ was adopted in East Hoathly but, in common with many other Sussex parishes, it seems likely.

[5] To the nearest whole English pound.