On 8 June 1782, the parish of Wednesbury became indebted to the tradesman Silvanus Earp for a ‘chip’ hat, priced eight pence.  This refers to a hat made of ‘chip’ straw with a fairly wide brim.  Such headgear could be fashionable, and straw hats were certainly customised by both retailers and consumers with a bow or other additions to maximise their flamboyancy.  An entry in the Derby Mercury for 12 June 1800, for example, recommended that the fashion in women’s ‘walking dress’ required a coloured chip hat with flowers at the front.  News from London specifically in 1782 reveals that high-quality chip hats could be worth stealing, but could also be used by elite women in fancy dress who were ‘slumming it’, such as when Lady Beauchamp adopted the character of a French peasant girl for a masquerade ball at London’s Pantheon.  In the case of the Wednesbury purchase, we assume the hat was plain and intended to be worn by a parish pauper. 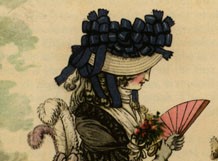 This image, cropped from The Gallery of Fashion (June 1794), shows the brim of a chip hat: the crown is largely concealed with a profusion of ribbons.

Silvanus Earp (1747-1822) was a general dealer in the 1780s, supplying the parish with both foodstuffs and textiles.  He was not used often by the parish authorities, being present in only a handful of the hundreds of vouchers transcribed for Wednesbury, but enjoyed a personal connection to the parochial officers which proved useful.  The witnesses to his marriage in 1774 included John Guest, presumably the man of the same name who was an overseer of the poor for Wednesbury in 1782.  There at least three generations of Silvanus Earps in the locality, since his father Silvanus senior was a baker in Wednesbury, while one of his sons  Silvanus junior was a factor or merchant who by 1851 had retired to Wolverhampton.  By the time of his death in 1822 he was described as a gentleman and left a lengthy will, albeit his estate was valued at under £100.